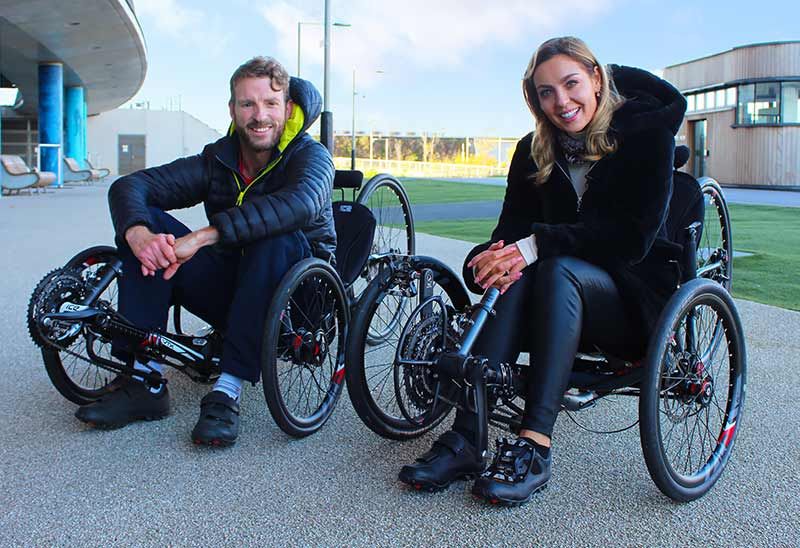 It’s not every day that you get a call from one of the UKs most popular and one of the nation’s favourite BBC TV shows asking for help. BBC 1 Strictly Come Dancing none the less. They were looking for two fast recumbent ICE trikes to use for filming for last Saturday nights show. Of course we said yes, when would you like them and where. So off went Phil and Drew to the Lee Valley VeloPark, home of the London 2012 Olympic Games and the 2014 INVICTUS Games cycling events here in the UK.

JJ had the idea that as Amy Dowden, who is a renowned professional dancer from Wales and principal director of Art in Motion Dance Academy, has been teaching him how to dance during this series of Strictly Come Dancing, that he would teach Amy how to ride an ICE recumbent racing trike.

We arrive on location Tuesday morning in London bright and early and meet two of stars from Strictly Come Dancing, JJ Chalmers and Amy Dowden on location, all socially distanced of course. 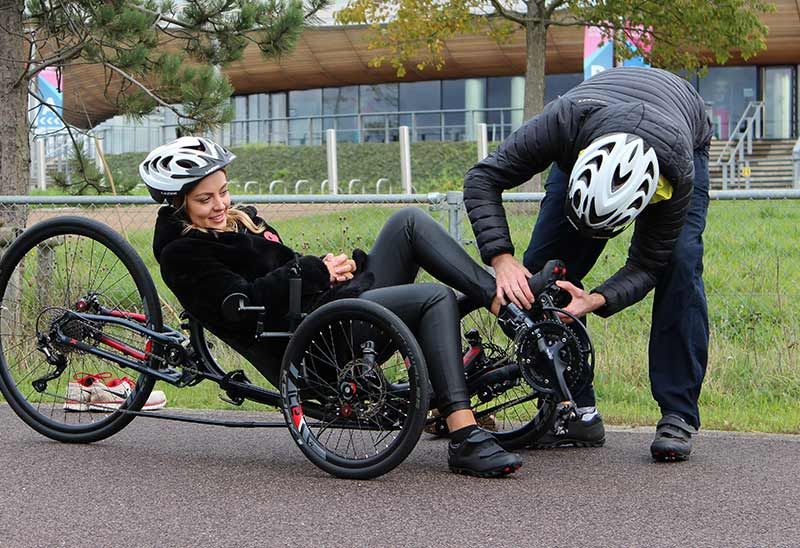 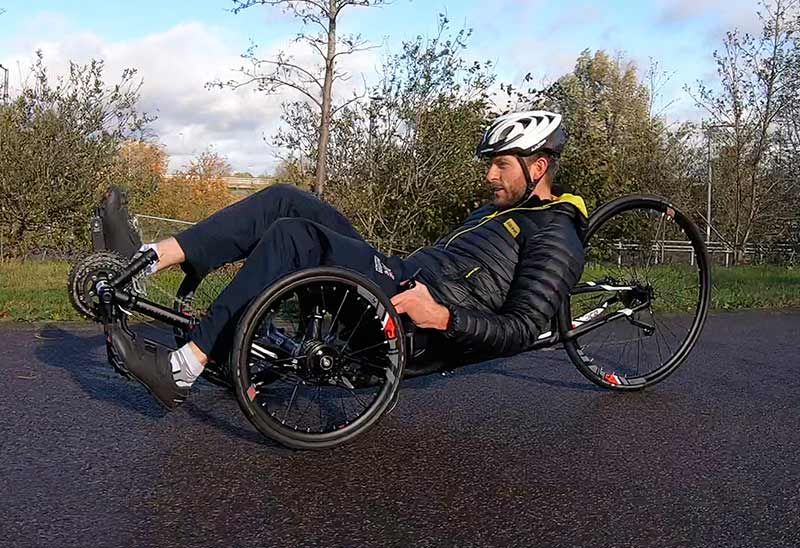 JJ has been an ICE trike owner and rider for many years. JJ is an ex royal marine, TV presenter for BBC Sport, BBC Radio 5 Live, The One Show, Channel 4’s 2016 Rio Summer Paralympics, and the list goes on. JJ is a renowned public speaker and Invictus Games gold medallist who captainedthe 2014 Invictus British recumbent cycling team. Famously pictured crossing the finish line together with his fellow athletes in the recumbent races.

Unable to confidently and comfortably ride a traditional bike JJ found that riding a recumbent ICE Trike has really helped to contribute to his physical and mental recovery, as JJ says “The trike has changed my life”. The trike enables you to ride in comfort, it’s safe, very stable and is much kinder on your body by removing all the painful contact points and riding position associated with a traditional bike.

First time trike rider Amy Dowden was given an introduction to our two racing trikes. Including how to ride them, steering, changing gear and more importantly how to stop. JJ explained how the trike has changed his life for the better and has helped him to exercise and helped him recover from his injuries.

JJ chose to ride the world record holding ICE VTX which is currently the fastest un-faired multi-track trike in the world and Amy liked the look of the sleek ICE Sprint X with rear suspension. Both of these trikes are low, fast, extremely comfortable, stable and go around corners like they are on rails.

The race was on, they put on some cycling shoes, clipped in, a few words of advice from JJ, on your marks, get set, go. They were off, both being very competitive they didn’t hang around and could be seen speeding off into the first downhill bend. After completing several laps of the circuit, and you could hear Amy shouting this is amazing and they sped past.

We were honoured to be asked to join JJ and Amy from the BBC Strictly Come Dancing team in London, JJ is the perfect ambassador for ICE trikes, by owning and riding an ICE Sprint for many years and encouraging other in their accessible and inclusive cycling journeys.

Good luck to JJ and Amy in the rest of the competition, the entire ICE trikes team will be watching.

As seen on Saturday 7th November, BBC 1, 7.25pm, catch up on the BBC iPlayer.
Skip forward to around 44 mins into the programme.

Filmed before the UK Covid 19 national lockdown, social distancing and PPE was in place on the day.
JJ Chalmers, Amy Dowden and BBC Strictly Come Dancing do not endorse our trikes. 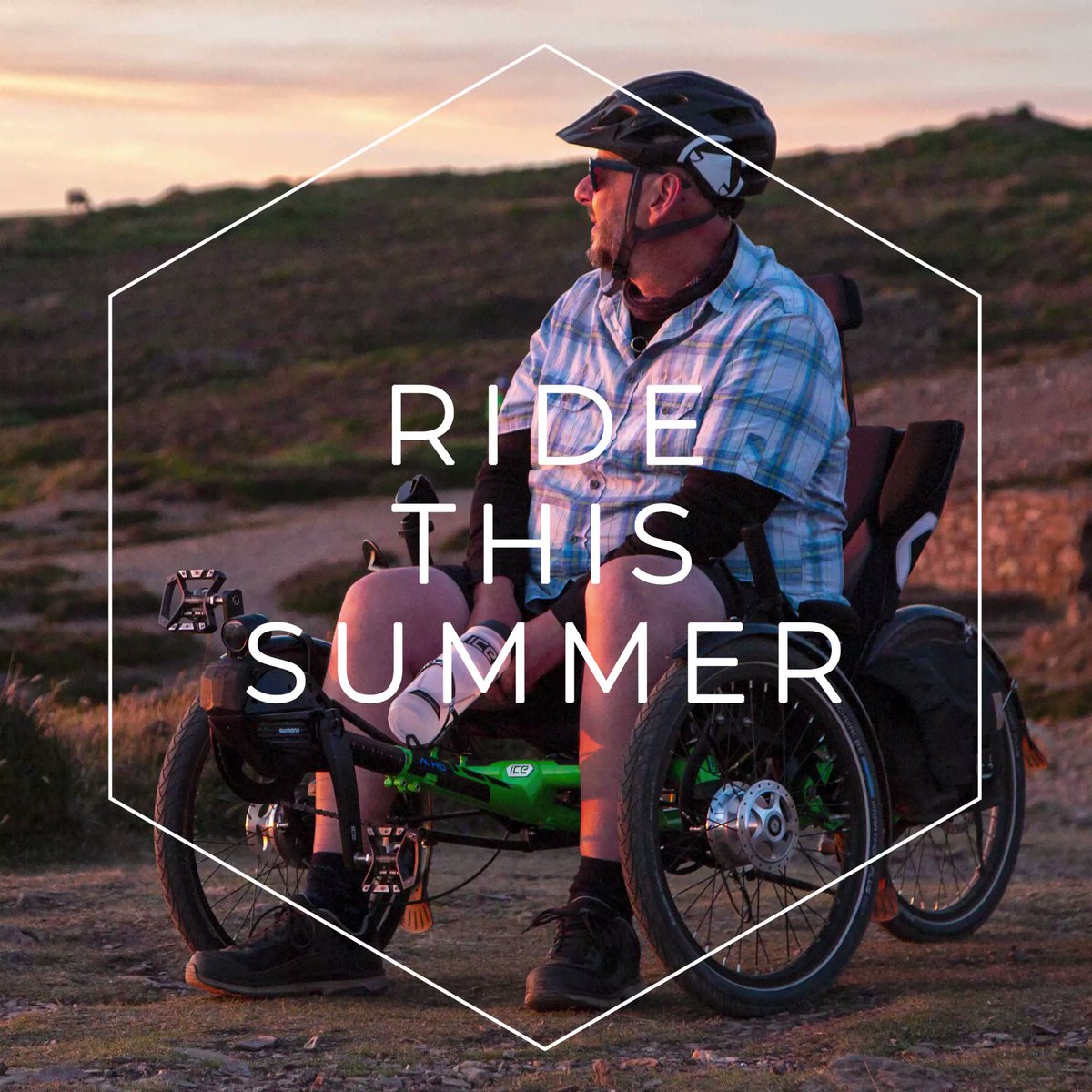 FREE On-the-Road Pack when you order a trike this August! All you need to get out and ride this Summer, including a rear mudguard, Shimano XT pedals, mirror and flag. Saving you £244, $312, €227. Trikes available now. Contact your local dealer. icetrikes.co