ICE Trike riders all use their trikes in different and exciting ways. Some commute, some race and some go on night time photography adventures. Gordon from North Yorkshire uses his Adventure HD trike and trailer not just to explore the beautiful countryside but also to explore the heavens. Thank you for sharing your story Gordon.

My name is Gordon Haynes, I am 60, retired and live in Harrogate, North Yorkshire. I have been a keen astronomer, photographer and cyclist for over 40 years, but these were always separate hobbies. My cycling was on bicycles and was mainly competitive doing time trials from 10 miles to 12 hours. Later, in my 30’s I took up running as well and incorporated running and cycling competing in duathlons around the country as well as ultra distance running in events up to 50 miles. Unfortunately, this took its toll on my one knee resulting in a total knee replacement 6 years ago.

About 14 years ago I also combined my love of astronomy and photography and started taking pictures of galaxies, star clusters and nebulae with a specialist telescope system from my back yard in Hereford where we used to live.

After having my knee operation my cycling took a back seat almost completely as it became more uncomfortable riding due to my “new” knee not bending quite as smoothly as my other one and this in turn affected my other joints and back and I fell out of love with cycling.

In 2016 I started experimenting with time lapse photography of the night sky and a friend of mine or my brother gave me a lift out into the country and I would hike the rest of the way with my camera gear in a back pack. I did a few trips like this while still living in Hereford, but due to carrying the extra weight it did make me suffer for a few days with my joints.

In 2017 my partner Joanna and our 3 German Pointer dogs moved to Harrogate in North Yorkshire, but unfortunately because of where we moved it was no longer practical to do the photography with my telescope system so that was sold. At this time I bought a hiking trailer to carry all my camera gear, thermal clothing, food, drink, etc which attached to a padded hip belt meaning that it was easier to transport my gear to where I was doing my overnight time lapse shoots. The only issue with this was that I was somewhat restricted as to where I could go as I had to go part way by train and hike the rest of the way.

Now we come to my ICE Adventure HD and how that came about. In July of 2020 when we were right in the middle of the first wave of Covid-19 I was sat at home and went to answer a comment on my YouTube channel, on my computer when you first access YouTube you are presented with a screen of random videos and one of them caught my eye, it was about a man who posted a video titled “Why I ride a recumbent trike” and as I have to admit I’ve never seen one I put it on, as I watched the video I realised that it could have been me in that video, same age, same physical issues, etc. After this I did a fair bit of research online into different makes, models, uses, practicality, cost, etc. Eventually I decided on an ICE Adventure HD 26”. The reason for this particular model was that I was no longer interested in speed, it needed to be easy to get in and out of with my knee problems, because I sometimes go up un-tarmacked tracks it needed good ground clearance, due to me being a bit “generously proportioned” and that I will be towing a 40kg trailer I chose the HD model.

I found that there was a dealer just over 20 miles from me in York called “Get Cycling” but due to the lockdown, risk of travelling on public transport with Covid-19 I ordered it on spec without a test ride, that was in late November 2020. In March of this year it was ready so I went by train to Get Cycling (masked up and socially distanced) and after having a fitting for the boom length I rode it back home to Harrogate (23 miles). As I hadn’t ridden a bike in over 18 months and the longest distance I had ridden in one go in the previous 5 years was 10 miles my legs were tired but no other aches or pains so I was delighted.

All this has meant that I now enjoy my cycling again and I have had my hiking trailer converted for cycling use I am now totally self sufficient with my overnight time lapse trips and unlike with public transport I am no longer restricted as to the areas that I can go to which opens up a whole lot of new opportunities.

Going on an overnight trip isn’t a case of just packing everything up and going, there is a lot of planning and preparation involved. I first do research on the area to see about ease of access (roads, paths, etc) and scenic interests, I then use STRAVA to draw a route which I transfer to my Garmin Edge 530, I then have to make sure all my batteries, power tanks, etc are fully charged. I have a 110 litre strong holdall which is large enough to carry my camera bag which has 2 DSLRs, 3 lenses, intervalometers, dew heaters, spare batteries, tablet, head torch and power tanks), down suit (rated to -50c), inflatable bed roll, 3 tripods, food and drink, collapsible camp bed and tent, occasionally I also take a motorised camera slider for time lapses with added camera motion and a drone for additional scenic footage. All of this goes on the trailer which is attached to my ICE Adventure HD via a weber linkage. I also do several checks on the weather to make sure that it is going to be suitable for night sky photography. So, the whole trip from planning and preparing to actually getting to the site and setting up and shooting is a bit of an adventure in itself. I now also have a 360 degree camera which I have been using for footage of the journey, time lapse of me setting up, etc to add extra context to the finished videos. My finished videos now include footage of journey there and back, time lapse videos of the night sky and surrounding scenery, star trails (animated and still) and night landscape pictures, I also shoot “Holy Grail” time lapse sequences (day to night and back to day).

So far I have done two overnight trips and my ICE Adventure HD has got me and all my gear to my destination in comfort and without any issues, it tows my fully loaded trailer easily and sometimes I do check to see if it still there as the stability and smoothness of the ride doesn’t seem any different as to riding without the trailer, the gears are plenty low enough to get me up any hill with lower gears still in reserve. The riding position allows me to enjoy the countryside while I am riding which is a big bonus where I live now. In between trips I am out riding almost every day with some of the rides scouting out for suitable areas for overnight trips.

When I first started cycling, photography and astronomy I would never have dreamt that I could combine all three at the same time. Now, thanks to my ICE Adventure HD it has become a reality.

I have more trips planned to different areas that I haven’t been to yet and all of these, along with my previous trips and astrophotography can be seen at my website below and also my YouTube channel.

Find out more about the Adventure HD here.

Find out more about Gordons Photography : 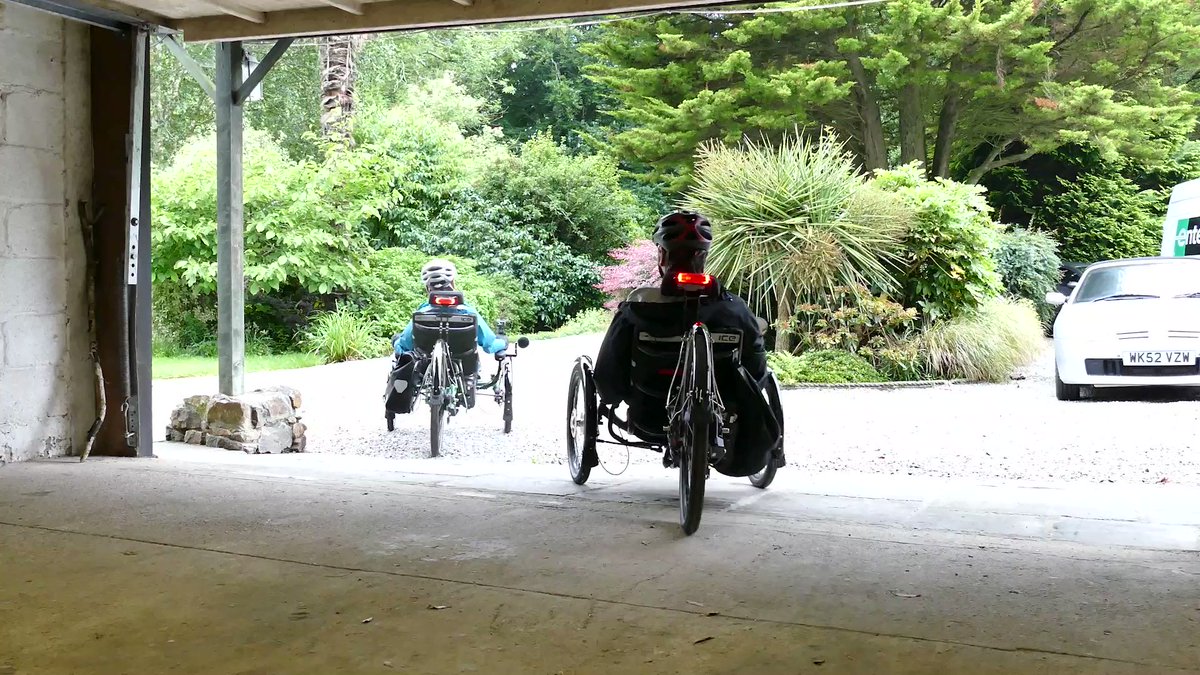 Racks, Bags and Luggage Options … we have it covered! Whether it’s a ride to the corner shop or going on a month-long trike tour, ICE has many great options for carrying your essential stuff. See the range, watch the full video: icetrikes.co/accessories/ra… #icetrikes #cyclebags